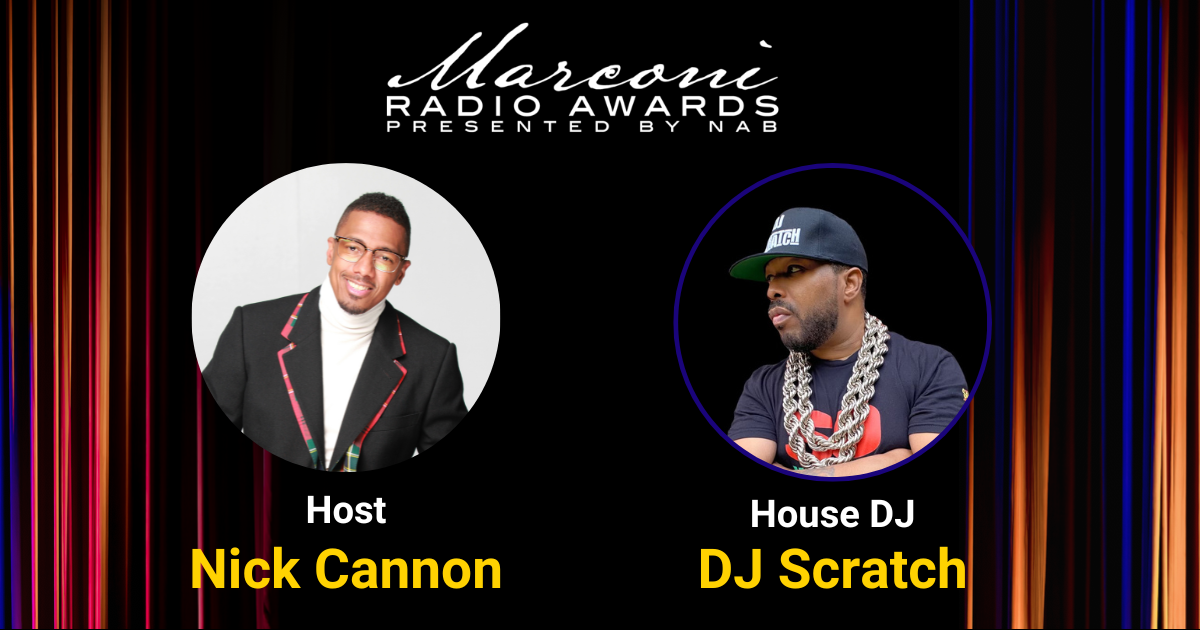 WASHINGTON, D.C. — Multi-hyphenate entertainer and media mogul Nick Cannon will host the 2022 Marconi Radio Awards Dinner on October 19 during NAB Show New York. Record producer and radio host DJ Scratch will provide live music during the ceremony, which celebrates excellence in radio and is returning in person after a two-year hiatus.

Cannon began his career in television as a teenager on Nickelodeon’s sketch-comedy show “All That” and his spin-off, “The Nick Cannon Show.” His numerous film appearances include starring roles in “Drumline,” “Love Don’t Cost a Thing” and “Roll Bounce.” Recently, he wrote, directed, produced and starred in “She Ball” and “Miracles Across 125th Street.”

Additionally, he serves as the label head and music business curator of Ncredible Entertainment, where he has helped discover and develop award-winning talent such as H.E.R. and Kehlani. In 2009, he became the youngest television chairman in history when he was named chairman of the TeenNick network.

DJ Scratch co-hosts a weekday radio show with Shelley Wade on Audacy’s 94.7 The Block in New York, where Cannon also serves as mid-day host. DJ Scratch has worked with some of the biggest artists in hip hop during his career, including LL Cool J, Busta Rhymes, A Tribe Called Quest, Wu-Tang and EPMD. He has produced 19 albums that have been certified Gold, including seven that have been certified Platinum, and is a three-time Grammy Award nominee.

DJ Scratch is also a champion of top DJ competitions over the years, including the 1988 New Music Seminar’s Battle for World Supremacy and The Global Spin Awards’ Turntablist of the Year in 2012, 2013 and 2014.

He has served as the resident DJ for three nationally airing TV shows and appeared in the Spike Lee film, “Bamboozled.” He currently serves as one of the official DJ/hosts for the digital series “VERZUZ,” which began airing through Instagram Live in spring 2020.

“NAB is excited to be joined by the talented Nick Cannon and DJ Scratch to honor the on-air voices and local stations that have shined brightest over the past year as we return to an in-person Marconi Radio Awards,” said April Carty-Sipp, NAB executive vice president of Industry Affairs. “We look forward to welcoming the broadcast community to this crowd-pleasing and lively celebration of the best in radio.”

Established in 1989 and named after inventor and Nobel Prize winner Guglielmo Marconi, the NAB Marconi Radio Awards are given to radio stations and outstanding on-air personalities to recognize excellence in radio.

The finalists for this year’s NAB Marconi Radio Awards can be found here.

Additionally, Ryan Seacrest will be presented with the NAB Distinguished Service Award, and Paul and Fred Jacobs will receive the National Radio Award.

About NAB Show New York
Produced by the National Association of Broadcasters and co-located with the AES New York 2022 Convention, NAB Show New York will be held October 17-20, 2022 (exhibits October 19-20) at the Javits Center. Located in the media capital of the world, NAB Show New York offers hands-on learning, discovery and insights into the technology and business strategies that are transforming media and entertainment. Through exhibits, conferences and networking events, NAB Show New York spotlights the products, practices and leaders promoting superior audio and video experiences. Learn more at www.nabshowny.com. About NAB
The National Association of Broadcasters is the premier advocacy association for America’s broadcasters. NAB advances radio and television interests in legislative, regulatory and public affairs. Through advocacy, education and innovation, NAB enables broadcasters to best serve their communities, strengthen their businesses and seize new opportunities in the digital age. Learn more at www.nab.org.